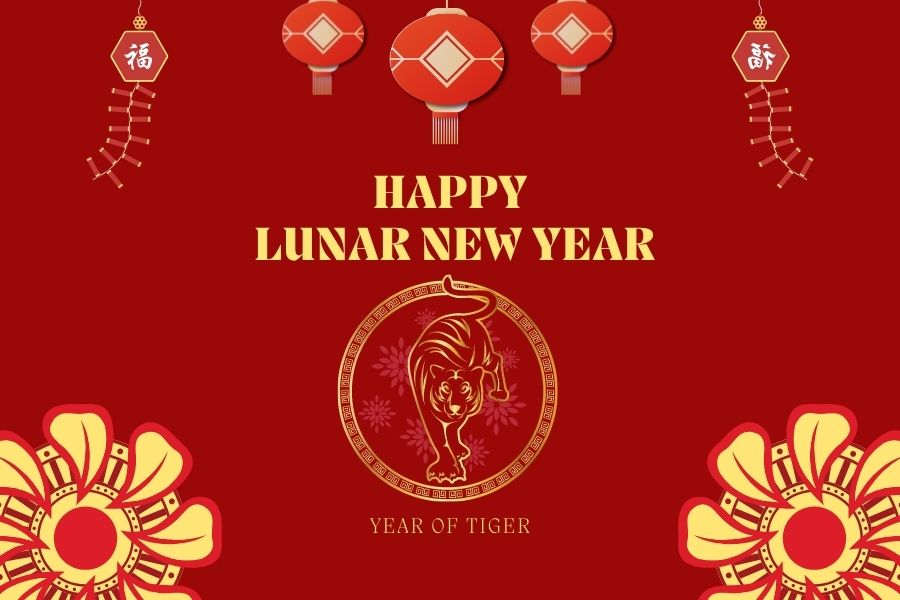 What is Lunar New Year?

There is a cycle of 12 animals, one of which is assigned to each year as well as a cycle of five elements (wood, fire, earth, metal and water). These combinations of animals and elements creates a 60 year cycle. So this year is the year of the water tiger, which hasn’t happened for 60 years.

How is the Lunar New Year Celebrated?

Traditionally, the Lunar New Year is celebrated with a number of traditional practices and events. Before the Lunar New Year begins, festive cakes and puddings (“gao” in Mandarin or “go” in Cantonese) to be eaten to aide in growth and improvements in the coming year. This is followed by big cleaning in homes to help rid the home of any bad luck from the past year. To help bring in good luck, A large family reunion dinner is held on Lunar New Year’s Eve. The menu includes dishes that are associated with luck: fish, puddings, and dumplings (they look like gold ingots!).

The Lunar New Year is all about focusing on the positive and using auspicious language. The early days of the new year are filled with visits between family and friends, except for the third day. This is known as at the “chi kou”, or red mouth. It is believed that arguments are more likely to occur, so people tend to avoid social interactions.

Other common practices during the Lunar New Year include:

The final day of the Lunar New Year festival is filled with fairs, massive lanter displays and fireworks.

Want to introduce your children to the Lunar New Year? Try one of these children’s picture books!

Goldy Luck and the Three Pandas by Natasha Yim

Set in a contemporary Chinatown, this book is an adorable retelling of Goldilocks and the Three Bears. After Goldy Luck accidentally wreaks havoc on the home of a family of panda bears, she decides to embrace the fresh-start spirit of Lunar New Year and set things right.

A little boy’s parents are not amused when he brings home an old wok from the market, instead of food. However, the wok has magical powers, and it skips through the countryside, gathering food, and toys which the boy’s family is then able to share with their neighbors. A fun take on Jack and the Beanstalk, this book is filled with spirited text and lively illustrations!

This book follows children in China, Thailand, Vietnam, Korea, and India as they celebrate the Lunar New Year. Each child celebrates differently, with customs and traditions that are all their own.

Want to Learn About Other Holidays & Celebrations?

Discover other celebrations and festivals such as new year festivals, how others honor their family and loved ones, celebrations of freedom, and more with the Match the Pair: Worldwide Holidays & Celebrations. This memory matching game has two images of each holiday or celebration so that your child may work on finding the matching image. While the name of the festival is written on each card, a small booklet insert is included with a short summary of the celebrations and a suggested book to read together. Buy Now!